How Fast ForWord Fills In Missing Literacy Skills in Autism: One Mom’s Story There was a time in my late twenties when I was quite certain I knew exactly how I was going to raise my kids. I had it all figured out. So much so that I was already judging other parents.

How could you let your kid do t-h-a-t? Oh, noooooo. Not in MY house.

I had high expectations of myself AND my children.

Of course, at the time, I didn’t yet have kids.

It’s not until that bundle of joy is plopped into one’s lap that one realizes that parenthood is all about being a student. Our kids constantly globbering us with lessons. At some point, a very humbling admission occurs. We have a lot to learn.

Becoming a quick study of the nonexistent parental handbook is no easy task. That’s amplified when you have a kiddo with special needs or learning differences/disabilities.

Depending on the special circumstances of the child, one might have to become an unofficial expert on all kinds of complicated subject matter. And given the number of struggling learners has risen exponentially in the last decade, many parents like me find ourselves needing to learn ALL about how our kids’ brains work, the intricacies of how they learn and how skills are broken down.

As you can imagine, this can all be quite the challenge, so finding an intervention that makes navigating learning differences so much easier is extremely helpful.

I Could Kick Myself

We had a trusted practitioner in my son’s life suggest Fast ForWord about two years ago. It was more than a suggestion; it was “you must do this.” Problem was, at the time we were exhausted, depleted and didn’t have the bandwidth to consider anything new. We were five years into my son’s autism diagnosis and had been going 1000 miles a minute with a multitude of interventions both medical and therapeutic.

Thankfully that practitioner wouldn’t let it go, I kept telling her we’d get around to it but it wasn’t until my son was in second grade when his significant issues with reading comprehension became glaringly obvious that we finally got around to given Fast ForWord a go.

I knew Fast ForWord was more than reading comprehension. I knew it worked on baseline cognitive skills like memory, attention and processing speed but until we got into the thick of the program, I didn’t really understand how building the foundation is paramount in (a lot of things) but certainly with having a successful reader.

Filling in the Potholes

We started our Fast ForWord journey at the beginning with their “Language” series. Then moved onto the “Language to Reading” series. A few weeks ago, as we started to near the end of the second stage of our Fast ForWord programming, I had one of our scheduled calls with our Educational Consultant. We were discussing how Sulli has been doing and the fact that he would be wrapping up the second series soon and moving on to Reading Level I.

She asked how I thought he was doing, and I told her about all of his incredible gains but mentioned to her that of all the gains that we are seeing, the one area that we hadn’t seen a lot of progress in was reading comprehension.

She proceeded to explain some things to me that I just hadn’t considered before, or perhaps someone had explained to me before, but my brain was too maxed out on bandwidth at the time to absorb it. You see, as I mentioned before, we parents simply don’t know everything. And keeping up with the multitude of challenges that face a kid with autism can suck up a parent’s brainpower like a turbo vacuum cleaner. At any rate, I’m happy I could hear it now because it was a big light bulb moment.

I tell our Education Consultant about my concerns with his lack of progress with reading comprehension and she replies … well, yes, we haven’t gotten there yet.

She tells me to think of the brain like a road. And my son’s road has a lot of potholes. We don’t know where they’re all at exactly, but the work we’ve been doing with the first two series of Fast ForWord has been identifying them, and slowly starting to fill them in.

Once we fill in the potholes, the road to reading literacy will be much smoother. It’s a very simple visual but one that made so much sense. I happen to live on an island in the Caribbean so I know a thing or two about pothole-laden roads. And I know it is so much easier to coast over a filled in hole than to constantly maneuver around them.

This is why Fast ForWord is so good. It addresses the core deficiencies. It finds the weak areas (or potholes) and strengthens them. It isn’t about finding a work around. Navigating a pothole-laden road is exhausting and stressful, and when you nail one, it hurts like heck. I don’t want my son to always feel like he has to steer around his challenges. How much better to mend the hole and drive right over?!?! 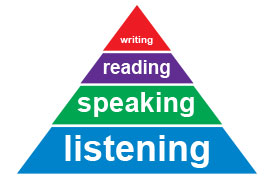 This pyramid was shared with us as we were trying to better understand what is happening in Sulli’s brain as we move through the Fast ForWord program.

Now, many kids with autism have very scattered skills. One kid can be completely neuro-typical in one area, perhaps even more advanced than his/her age, but then can be years behind developmentally in another area. It can be so frustrating to witness brilliance in one area and know that the brilliance exists all over, but it’s locked away.

Autism is complex. I know some people with autism who can read and write with stunning form but can’t speak a single word. Others like my son, who were hyperlexic when they were young, meaning he could read well above average at age 3, but as he’s aged, we’ve realized that his comprehension is vastly delayed compared to his fluency.

So there are certainly exceptions to the hierarchy of this pyramid, but in terms of what we’ve witnessed, the importance of the bottom layers have become crystal clear. Yes, my son can technically do all of these things, listening, speaking, reading and writing. But in order to move his language, reading and writing into the complex realm in which we live, we’ve got some serious work to do on the foundation.

All of the Fast ForWord exercises we’ve done to date have been ALL about listening. And clearly my son had a LOT of potholes in this department. He has always responded better to us, his family, because we’ve learned the best way to communicate with him. Our tone, pace and complexity of sentences … we’ve naturally modified for him. But guess what? The world outside our four walls doesn’t work that way.

We’ve been doing these exercises at least five days a week (more if we can) for the last four months and his auditory and language processing has sped WAY up. He is listening better, he is hearing more. Not just trying to string together bits and pieces of conversation, trying to keep up, but actually beginning to keep up! And because of this, we’ve seen an explosion in his speaking skills.

We recently moved into the Reading Level 1 exercises and while these games are a departure from the ones he’s done before, I’m enamored by how the program continues to break down small skills as building blocks to bigger ones.

It’s true. Parents don’t have all the answers. But we do have a lot of resources at our fingertips. And our family is very thankful Fast ForWord has helped us better understand how listening, reading, writing and speaking all impact one another. Our road is getting smoother every single day.

Want to see if Fast ForWord is right for your child? Click here to sign up for our free webinar and information meeting on Tuesday, November 24.